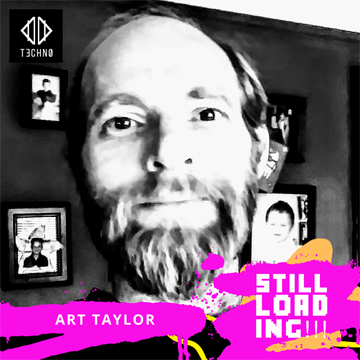 I am an artist born in Detroit, raised in Hamtramck, MI.
I am a painter, a dreamer, and a doer.

My first recognition as an artist was while I was still in High School, winning a Logo Contest held by the MASC in 1993. The next was getting credits as art, stage, and lighting director positions by the HHS Drama Club advisors after being asked to
create a set for their play. It’s a great story of 2 weeks of my life that I wont get into here, but what a challenge it was.

I made my first professional sale in 1995, after winning the Hamtramck All City Art Show with a mixed media print about the dilapidation of the city, the piece sold within a week.

I won an art scholarship contest to Sienna Heights University in Adrian, though I never attended. Two weeks after graduating in 1996 I chose instead to move to Florida to help my father with his DJ business. I ended up attending Valencia Community College taking classes in Art, Early Childhood Education, and Secondary Education,
while working a full time job to support myself. Life’s journey took me out of Florida before I graduated, but lessons were needed from other places.

Over the past years, I have been fortunate enough to sell my artwork across the country, and have created many original commissioned pieces for a wide range of clientele.

In 2002 I moved to Oregon, where I had the opportunity to work with some great artists, and crafters. I sold my artworks at Portland’s “Saturday Market” until I was asked to leave due to the controversial matter one of my pieces, Ooops. So I set up shop in Waterfront Park outside of the market, on the bank of the Willamette River, and would sell to the public there on the weekends while working a “real job” to pay the bills.

I was hired by Patrice Canoy in 2005 as the Studio Office manager for Canoy Studio in Portland OR. There we used traditional Native American basket weaving techniques with non traditional materials to create everything from table tops, and kitchen backsplashes, to metal driveway gates made of copper and steel, or whatever the client could imagine.

I got married to my beautiful wife Beth in 2005 and in 2006 we were blessed with our son Sean. We moved back from Oregon in 2010 to be closer to family, since both my wife’s and my family live in the Metro Detroit Area.

Instead of starting back into selling my art, I got a job at a warehouse picking orders and stocking shelves.

In 2012 I started Art Taylor LLC to get back into the art game and began to sell my artwork again. While I like the feeling of getting a sale, even after years of it, I am not very good at self promotion, and I was still feeling unfulfilled.

So, in 2018 I began to teach others to paint, draw, create their own artistic style, and go for their own goals. I have spent my time teaching private lessons, and recreational painting groups at Senior Living Centers throughout Metro Detroit.

I have participated in the Eastpointe Art Show for the past Three years. I have become a mentor for a few rising artists and try to guild them on their journey. I do not see myself as a master, but still a student for life…. because there is still so much to learn.

With my goal of spreading the love of creation, and the joy I get from helping others succeed, I want to reach and teach as many people as possible while I am still on this plane.