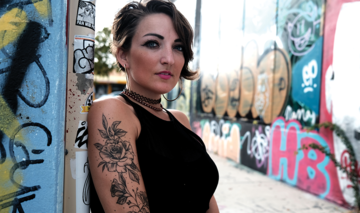 DI Techno, an all-female agency, has created Still Loading, an open-air art and music festival featuring local and international artists and performers from the community and neighborhoods of Detroit and beyond.  The two day art and music experience will be held on Saturday May 22 and Sunday May 23 from 11AM to 11PM. The 18+ festival will feature medium to large art installations, live music with national & international talent, and food trucks with a focus on healthier food options. The main will focus of this inclusivity vision was empowered for ADA accessibility, spearheaded by DI Techno’s founder and disability advocate, Melissa DiVietri, an abstract artist originally from Michigan but lives in Miami. DiVietri (32) was born with sacral agenesis, a rare condition characterized by the absence of part or all of the sacrum and lower spine who has had 14 surgeries but is able to move around with the use of arm crutches. She has spent half of life in a wheelchair before independently moving on forearm crutches. She has been advancing progressively with mobility from dancing and creating art. She owns multiple art galleries featuring abstract art and street paintings. DiVietri operates an agency that creates art and music experiences but consulting for cannabis industry; which is her passion.. Her mission is to pour her aspirations thru her stories and art by reflecting positive mindsets.

The full list of artists and musicians can be seen stillloadingmusicfestival.com

The idea for Still Loading was born last spring, after DiVietri — who splits her time between Detroit and Medellin, Columbia, where she goes to escape the cold winters that exacerbate her condition — was playing music for her neighbors at Capitol Park. One weekend security came out and asked her to  stop playing. She reached out to Detroit Downtown Partnership, who manages the park, about her experience and connected with CEO Eric Larson. He recognized DiVietri from a TEDx Detroit talk she gave about finding empowerment through living with a disability in downtown Detroit, they coordinated with DTE Energy Meg O’Heere to host an event in one of the city’s parks to empower the mission of voicing a platform for minority owned businesses. Still Loading was formed;

“Still Loading… like you’re 90% but still loading,” says DiVietri; people have been inside for too long. Time to come together and revitalize Detroit through arts and music.

The concept of acceptance has served as an inspiration for DiVietri — who’s organized house and techno events from Detroit and Chicago to Colombia — since she launched DI Techno in 2018.  She subsequently assembled a core team of five women and a network of nearly 60 volunteers worldwide, some of whom also live with disabilities.

Saturday, May 22nd from 11am to 11pm.  ADVANCE REGISTRATION REQUIRED

Sunday, May 23rd from 11am to 11pm.  ADVANCE REGISTRATION REQUIRED

All interviews, photos and live broadcast opportunities should be scheduled ahead of time by RSVPing with the contact below

Still Loading’s vision was created to provide an accessible event for individuals with limited mobility to pursue new ways for an inclusive, welcoming event.   We have designed the park space to have medium to large art installations, LED wall, and two live stages with techno + deep house,  tech house, and house music curated by the agency, DI TECHNO. We will include an ADA platform for elevation and viewing for any individual with limitations of mobility, vision. This is an 18+ event, with no alcohol on site; however two food trucks & coffee vending provided by Great Lakes Coffee. The event has two stages for music, LED wall, and activations of the art installations created by local talent. We are self-funded artists working towards creating this inclusive event that eliminates barriers for individuals who demonstrate accessibility differences; such as our founder Melissa; with a permanent condition of a physical disability, a rare disease called ‘sacral agenesis.’ We’ve developed ways for unique individuals to have an open minded opportunity at the open air art festival with art installations that embrace their differences. Learn more or become a sponsor at www.stillloadingmusicfestival.com.

“This mission will empower event planners on how to overcome challenges faced in accessibility & mobility using our agency playbook. This playbook is a step-up in leadership organization on how events should be strategizing for “inclusivity” welcoming all individuals on multiple mobility levels,” shares DiVietri. “Still Loading, will become the prime example on how thought leadership will always be advised to include ADA compliance guidelines for a barrier-free experience. This is only the beginning; an ADA platform, LED wall, ramps at entry points, drop off sections are just a few!’